Internet at the Speed of Light is Finally Here! 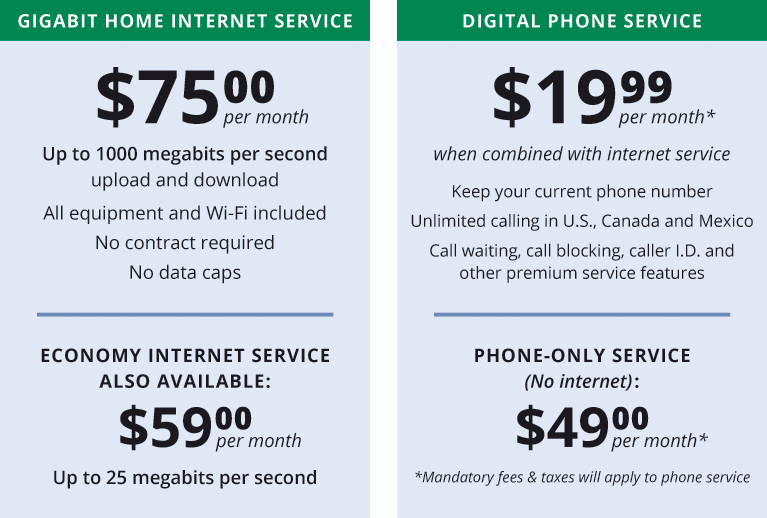 There is a one-time $99 activation fee on all accounts.
Your town’s MLP may choose to add a monthly MLP fee to help defray depreciation reserve requirements and debt service for the money borrowed to build the network.

When you sign up for service, your town’s MLP will bring a fiber connection from the network at the road to your house. The cost of this “drop” to your home will depend on how far you are from the road and whether you have overhead or underground utility service. The cost to you for this drop will depend on the available construction funds that your MLP has to work with.

The towns of Becket, New Salem, Rowe, Washington and Windsor are charter member of WiredWest, a municipal co-op formed to bring broadband to towns in Western Massachusetts. WiredWest will be your towns Internet Service Provider and has contracted with Whip City Fiber to operate the network and serve our customers.

Why are the towns of Becket, New Salem, Rowe, Washington, and Windsor working with WiredWest?
By serving its member towns on a regional basis, WiredWest will reduce the administrative burden, cost and risks of owning and operating a fiber network. Customers will pay WiredWest for services, and as a non-profit cooperative, it will return excess revenues to its member towns.

What does Whip City Fiber do? Whip City Fiber is an internet service provider owned and operated by Westfield Gas + Electric. It has a successful track record serving customers in the city of Westfield and is working with several towns in Western Massachusetts to launch broadband service over municipal fiber networks. As a subcontractor to WiredWest, Whip City Fiber will operate and maintain our network and deliver service to our customers.

Notes From the Underserved Archive

Susan Crawford is one of the three authors of the WiredWest Case Study. What Elizabeth Warren is to the Financial Services Sector, Susan Crawford is to Telecommunications Industry and the Internet. In this personal blog she expresses her dismay over the Commonwealth’s handling of the now-stalled effort to bring modern internet infrastructure to rural Western Mass (and indirectly to rural communities all over America).

The Hills Are Dead — Without the Sound of Internet Access sheds light on the national failure to provide high-speed digital access to rural America. link to her blog

Gov. Baker, connect us now and release the funding to build our network!

Our towns are withering. Without broadband, the future of small Western Massachusetts towns is bleak…

We’ve been living on wrong side of the digital divide for years, not able to fully participate in 21st century life and falling further behind year by year. But as last summer came into bloom, it looked like everything was about to change. True broadband—fiber to the home—seemed within our grasp.

Many of us were part of that moment, participants in historical town meetings with attendance busting standing-room-only votes to bring broadband to our communities. 24 WiredWest towns passed their funding authorizations in April, May and early June, approving $38 million to bring broadband to their towns. The mood was near euphoric. The 7 remaining WiredWest towns eligible for funding were looking forward to their town votes to join the regional project. Broadband was in our future. Finally! Detailed engineering planning and pre-construction surveys were projected to begin in a matter of months!

“Then,” said nationally recognized telecommunications policy expert, Susan Crawford, “the wheels fell off the bus.” And now, a year later, there has been no progress and all funding is currently frozen. The government agency the MBI, in charge overseeing the statewide initiative, providing 1/3 of the funding, and managing network build, has accomplished absolutly nothing.

What the hell happened?

Hundreds of town employees and volunteers across and were among them!—donated their time and expertise in engineering, financial, legal, technology and marketing fields to produce viable broadband solutions for their communities. WiredWest […]

Gov. Charlie Baker and Town Leaders Talk Over Video Skype at Stan Rosenberg’s Municipal Conference. Watch and Listen as Town Leaders Tell the Governor What Life Without Broadband is Doing to Their Towns.

Governor Charlie Baker expresses his point of view on the Commonwealth’s Broadband Project and his reasons for insusting on a delay, and then takes comments and questions from the audience at a meeting of municipal leaders from Hampshire & Franklin Counties sponsored by Senate President Stan Rosenberg on 4/9/16 at Greenfield Community College.  Town Leaders answer back, expressing their frustration over lost time and the pain the delay has inflicted on the small rural towns it should be helping.
David Dvore2019-10-21T20:41:08-04:00
Read More
Previous567Next

WiredWest: our cooperative solution for broadband internet in western Massachusetts

Q. When will we actually get broadband?

Q. Will subscribers have to keep their Verizon phone service to get WiredWest’s broadband service?

Q. Who controls the subscriber rates?

Q: How does MBI play into this?

Working together to build a state-of-the-art fiber-optic network to serve everyone and drive regional economic growth, create jobs, improve education and healthcare, and ensure a sustainable future for our communities.